Because Chad Austin Marketing and Media Design has received a six-month makeover!

Yes, it’s true! Since May 2015, Chad Austin Marketing and Media Design has been silently adding TONS of new written content about its services. CAMMD was trying to update its Search Engine Optimization and to make sure is was compliant with the April 2015 release of Google’s Mobilegeddon, an algorithm- or program- introduced into its Search Engine to favor sites that were mobile and tablet friendly. It’s taken 6+ months – and it’s not quite complete – but we’re ready to talk about it! The redesign clarifies current services and adds a few new services, of which we’ll talk about later.

So why so long? First, because we have to take care of clients first. Time left over was spent analyzing the current chadaustin.com content. Front this analysis the written content was reconfigured for Search Engine Optimization, which means: the content became relative to the search. 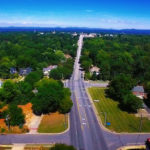 Still from the mini-movie “Highway 127 North.” Part of the This.Hickory Series.

What’s new? Well, Chad Austin Marketing and Media Design will soon be offering aerial video and photography using a DJI Inspire 1 flying platform, or unmanned aerial vehicle (UAV), or drone. Video is shot at 1080 HD at 60 frames per second, and photography can be rendered at 4K and be provided in DNG format. 4K video will be offered in 2016 Q2. A few upcoming projects include a year-long in the making documentary on Hibriten Mountain (Lenoir, North Carolina), and a mini-movie that highlights places indigenous to Highway 127 North (Hickory, North Carolina).

But there have been other video project done as well this year. Please take a stroll through our YouTube channel and see what’s new

Until Then: Eat broccoli! It be good for you.